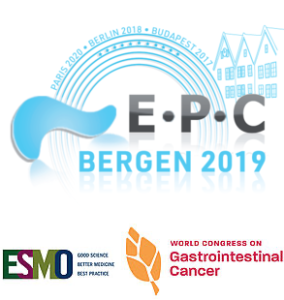 Pancreatic Cancer Europe had the opportunity to host a booth at the 51st European Pancreatic Club Meeting in Bergen, Norway, on June 26-29, and at the 21st World Congress on Gastrointestinal Cancer in Barcelona, Spain. During the meeting in Bergen, Nuria Malats, Sorin Barbu and Alfredo Carrato, Board members of the PCE association, each gave insightful presentations and Peer Bork gave a lecture on the gut microbiome and pancreatic cancer, which was chaired by Nuria Malats and sponsored by Pancreatic Cancer Europe. The beautiful city of Bergen was the perfect place for this meeting. Next year, the 52nd EPC Meeting will take place in Paris, and PCE of course looks forward to being represented again by the Secretariat and its Board. PCE was also represented at ESMO GI. PCE officially endorsed the event. Amid sponsors and other umbrella organisations such as Digestive Cancers Europe (DiCE), PCE was able to push forward the cause of pancreatic cancer. We had two very successful meetings which led to many more passionate people joining the platform at the European and national level. We sincerely thank EPC and ESMO GI for providing PCE with the opportunity to advocate for pancreatic cancer at their meetings.